Can you get through a week in the life of a modern black woman? SweetXheart (pronounced “sweetheart”) is a slice-of-life visual novel about microagressions, race, and gender. The game shares creative technologist Catt Small's perspective on being a Black woman seeking success in life, school, and her career. Players act as Kara, a 19-year-old girl from the Bronx who attends an art college and interns at a tech company.

Over five fictional days, players experience the highs and lows of life, including small interactions such as swiping a phone in the morning to wake up, getting dressed in the morning, and commuting to work. Minute choices such as the chosen type of outfit affect Kara’s life. Her stress level changes based on interactions with other characters.

This game can be played in the browser. It requires a mouse, touchpad, or touchscreen to play. Downloadable versions coming soon!

Why I made this game

I started this game in 2014 as an Independent Study project with game developer Kaho Abe during my time in NYU Tandon's IDM MS program from. After graduating in 2016, I decided to finish the game. What was initially a small project turned into a much bigger effort. Thanks to everyone who playtested the game and all of my Patreon supporters for making this fidelity of the final result  possible!

At Game Developers of Color Expo 2019, Creators Showed a Theme of Coping with Anxiety, DualShockers, 2019 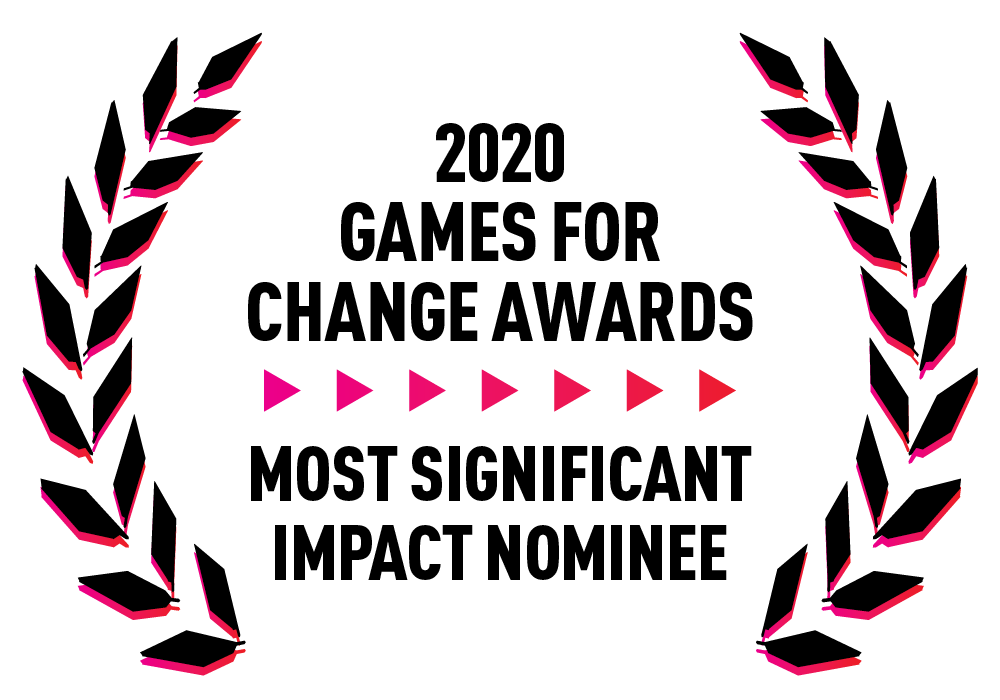 My favorite game was Dress Up - Games for Girls, but this game was recommended to me. She is very funny and I would recommend her to everyone I know.

I love this but unfortunately can't use this in school because of the one profane word. Any chance of a version of the game without it?

I really enjoyed this game. Playing from Kara's perspective, as well as her being in control of her actions and reaping the rewards/consequences are such an insight into what it's like as female living the day to day, and the stress that comes with that. Bravo!

That was a really cool experience. It was stressful, certainly. I've rarely had to put much thought into how I dress or what to do when catcalled. I made a lot of subpar choices, but it felt like I was exploring a new perspective.

this game is really good! i like it and the cat is really cute :D

This was one of my favorites from when I first discovered Itch.io. I always keep this in the back of my mind to recommend to people!

I came across this game while looking for examples of Phaser games for my class. I enjoyed the writing and overall daily life vibe a lot! I really appreciate the way subtle, often overlooked situations are handled and addressed in the story. I found the perspective to be very insightful as someone who has been lucky enough to never go through many of these situations as well. Thank you for posting this game, it was really wonderful!

Thank you for playing it! Hope your class goes well!!

I love the way you used the interactive medium of games to create a real empathetic connection with Kara, showing both her joys and struggles in daily life. I came out with a good week in the end but it was far from perfect for reasons out of Kara's control.

I found myself deliberating over wearing the clothes that Kara liked the most vs the ones that would make her less of a target for catcallers, and gravitated toward nonwhite women when choosing who to speak to, feeling that they were less likely to perpetuate racist and sexist microaggressions. Then they didn't step in when Kara was the only Black girl in the class and the only one excluded from conversation at school, highlighting to me that the Black experience is unique and that anti-Blackness can be perpetuated by non-Black people of all races.

I love that you didn't just show Kara's struggles though - being honest with and spending time with her friends and family were obviously really important to her, and I think that showing the little things such as swiping her phone in the mornings and petting Kitty helped me to connect with her.

Overall, I found this very insightful - being perceived as female, I found some of Kara's struggles familiar, but being white-presenting, I got a window into struggles I never have to face, and that was really valuable for me. Thank you for making this!

Thank you for saying all of this! I really appreciate that you saw all of this in my game.

cool people are saying a lot of good things about your game at cross-cultural impact jam :)

this was really fun! i didn't realize it was timed at first so i was very late to school lol but it was fun to try again! really nice dialogue and adult conversations. setting boundaries / telling someone how you feel is very hard and this game handles those things very well. and it was relieving, esp when kara's dad & when her boss at the internship listened to her. it's also interesting that i kind of knew who to avoid for reaching out (looking at you, red shirt guy). i'm white so i'm sure there's even more cues for black players. and that's awesome! thank you for this game! seeing kara through a good week made me feel a lot better too :>

Thank you for playing and sharing feedback! <33

Thanks for sharing the game! i liked it very much.

Thank you for playing!!

Neat game, though it took me a while to realise there was time pressure, and a mood indicator up there :D Being perceived as female and having read quite a bit about the situation for WOC in the US, this experience was about what I'd expected. The eye-opening thing for me personally was how Kara talked to her friends about their sleepover, and seeing the friends' perspective - that was a really nice interaction that I hope I'll remember next time I feel left out (:

I'd love to pay for your work, but PayPal sucks. Do you have any other option?

Thanks for your kind comment; I’m glad the game impacted you and I appreciate your feedback! I do have a ko-fi: https://ko-fi.com/cattsmall

Really enjoyed it, but more importantly, I found it heart-warming and I really felt like I got to know Kara as a character.

This was very eye-opening and interesting! The weird obsession with east asian pop culture kind of put me off since I'm Chinese, but it was definitely a learning experience that many could benefit from.

Thank you for playing! Yeah... unfortunately I was a bit of a weeaboo / koreaboo around that age. Gladly I grew out of it. I wanted to be honest about that part of my life even though it wasn’t pretty; it was part of finding myself!

Thank you so much <3

Really enjoyed this!  I had a pretty good run and didn't have too many bad interactions with creepy men on the street, but even just passing by I started feeling anxious that they would talk to me.  Very effective!  Enjoyed the interactions between friends and how small confrontations often ended in resolving situations instead of escalating.  Great game! :)

Thank you so much for playing, and I really appreciate you sharing what stood out to you most!

Other than not knowing how to get dressed the first day, I felt like I did okay. Got to say, men sucked all the joy out of Kara - Darius better text! My Kara was probably too assertive at work (coming from my white privileged background and being too old to put up with that nonsense). Kara is a joy and I hope for nothing but the best for her...now back to improve upon that 'meh' week!

i am black lmao

Love this gem of a game! Sadly, was able to relate to a lot of it being a black girl/woman most of my life. Thanks for sharing your work!

Wow, I found this really compelling.  It really felt like a great tool for teaching empathy.  It'd be cool if this could be turned into a platform where users could create their own versions of this game based on their own lives.  Seems like it could be therapeutic.

I had an okay week... and a great time playing this game!

I too need a kitty.... Thanks for making this.Was a relief after office.

Unfortunately, Kara doesn't have positive romantic experiences in this game :(

I love so much about this game, but right now I feel like making special mention of how happy it made me that Kitty is a little tuxedo cat.

But truly, this game made a profound impression on me. Thank you for this.

i'd love to have a download for this if it was possible so i don't have to play it in my browser, other than that its a great fun little game, wish there was more to it though since it is such a great game

I am working to get a downloadable version up! Thank you!

Wow this game is amazing i love it! <3

This is cool. The initial choices of each day create a kind of ritual mode, yet every day is different, which creates another kind of game mode. I like that. Every day includes the very familiar and the very unfamiliar. :) Good job!

This was really sweet and touching. The dread of the walk home from the station to the house, not knowing if there will be a catcaller there to ruin your night or not, was a really effective way of how the mechanics work. It was indeed memorable!

awe, this is cute, but I feel so bad for her sometimes :(

I liked this. It would be nice to have keyboard controls, though, so I can click Continue without accidentally choosing an option before I've read it.

This is good feedback, thank you!

I think Kara worries too much. When I spoke to the boy with colorful hair he told me that he was fine and Kara took that as an affront. She also got stressed out because she didn't do well in the dancing game even though it was just for fun.

She indeed does, it turns out she's quite an anxious person :3

I love this cute game! I actually expected it to be more negative and based on racism, so I'm glad it was possible to have a good week. I think I spent way too long on that coding part and still ended up making a crappy program (according to gamer guy), so I feel like that part needs something more. But good game otherwise.

Very cute. Would love to see multiple peoples perspective though. Good graphics and good storyline. It would also help if i had help on the coding part. Some of it didn't make sense. Maybe help the reader next time. But overall a very well made game and very cute. Keep up the good work!

Thank you so much! 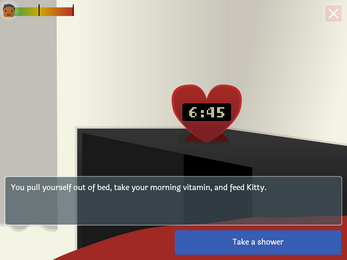 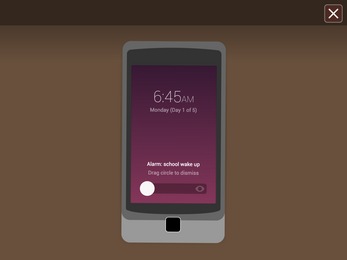 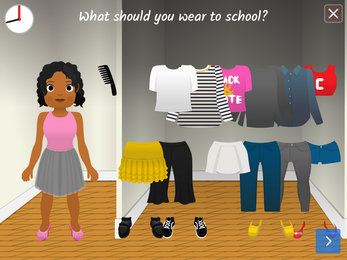 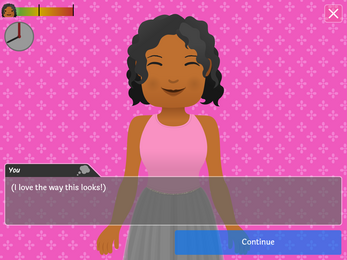 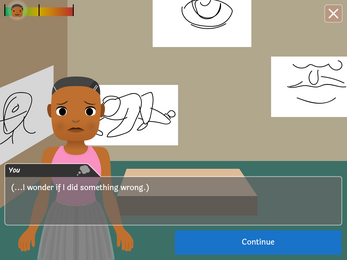 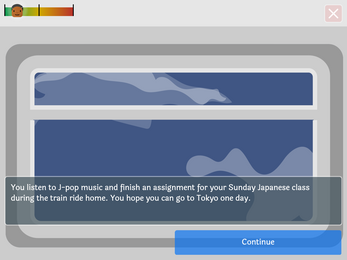 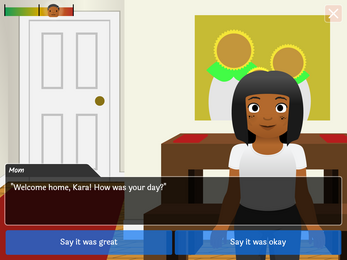 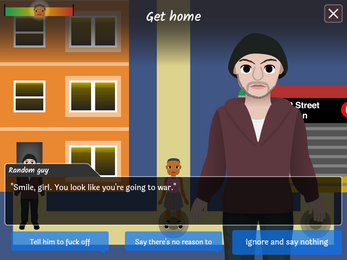 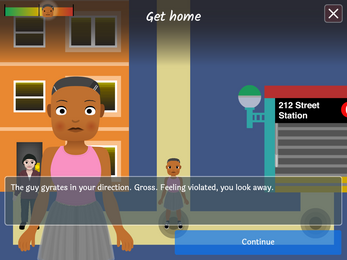